Redmi 9 Power With Snapdragon 662 Launched: Everything you need to know 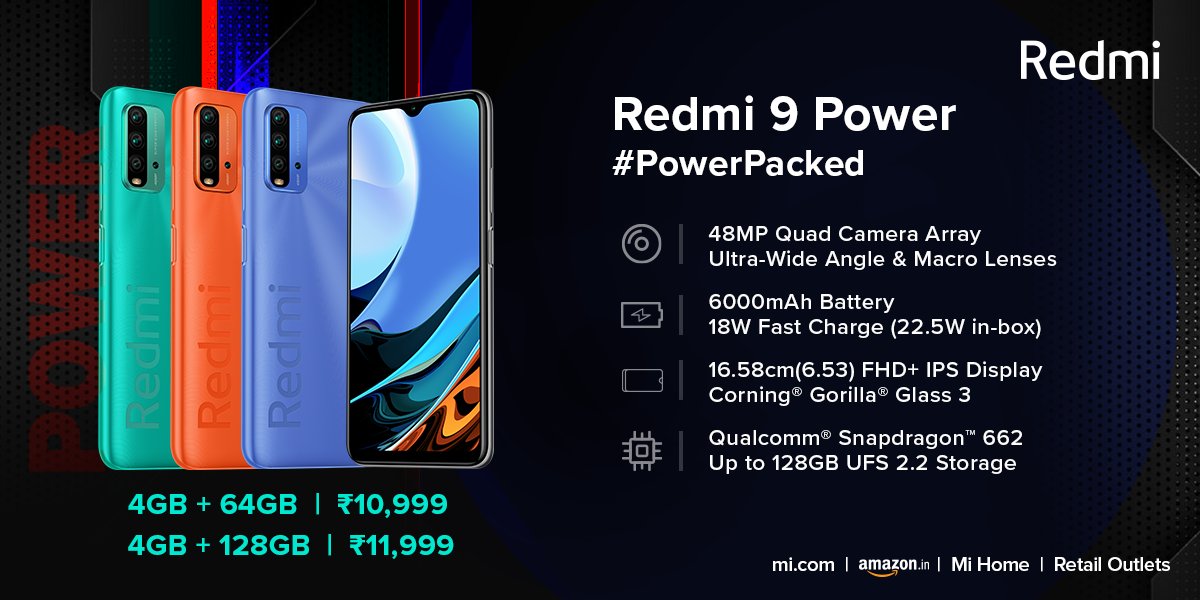 Xiaomi has announced the launch of Redmi 9 Power with Snapdragon 662 processor and quad rear cameras in India. The smartphone is regarded as a budget device with 128GB variant costing only Rs 11999. Moreover, the device will compete with the likes of Oppo A series, which has also got 4GB RAM and 128GB storage. The front camera is housed inside a waterdrop-style display notch module. The device is pre-loaded with MIUI 12 paired with stereo speakers.

The Redmi 9 Power boasts a 6.53-inch FHD+ Dot drop display with a resolution of 1080×2340 pixels and a 19.5:9 aspect ratio. The screen is protected by Corning Gorilla Glass 3 paired with 400-nits brightness. The handset is pre-loaded with MIUI 12 based on Android 10 operating platform. Under the hood, the Redmi 9 Power is powered by Snapdragon 662 chipset alongside Adreno 610 graphics processor. The handset is available in 4GB RAM variant coupled with 64GB and 128GB expandable UFS 2.2 internal storage. You will be able to extend the storage up to 512GB via microSD card slot.

On the optics, the Redmi 9 Power carries a 48MP primary camera, an 8MP ultra-wide-angle secondary sensor, 2MP macro, and 2MP depth sensors respectively. The selfie front is housed with an 8MP AI sensor with support for Face Unlock technology. In addition to 4G VoLTE, the Redmi 9 Power provides support for Wi-Fi, Bluetooth 5, GPS, A-GPS, IR blaster including a headphone port. The addition of USB Type-C port enables you to quickly charge the device.

The handset also comprises Hi-Res Audio stereo speakers with support for Widevine L1 certification for HD web streaming. You will find the fingerprint sensor mounted on the side panel. The smartphone borrows power via a 6000mAh battery with support for 18W fast charging technology. You will also find a 22.5W fast charger inside the box. The smartphone also comes with an Enhanced Lifespan Battery with reverse wired charging functionality.

The Redmi 9 Power is available in both 64GB and 128GB storage capacities. While the 64GB RAM model is up for grabs for Rs 10999, the 128GB storage variant will hit the retail shelves for Rs 11999. The smartphone will be available via Amazon, Mi.com, Mi Homes, Mi Studios, and Mi Stores. The first flash sale is slated for December 22 at 12PM. We expect the Power smartphone to become available for open sale during Republic Day.

Infinix Smart HD 2021 and Snokor A10 Soundbar Launched in India