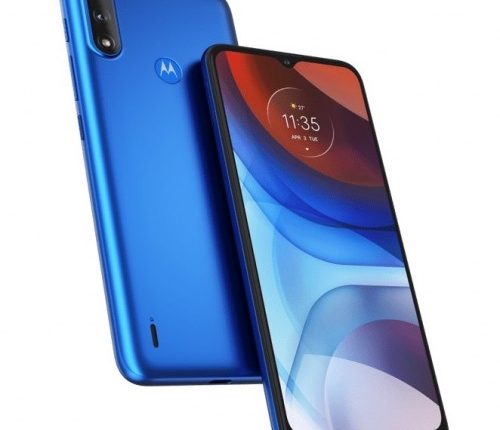 Motorola has announced the launch of Moto E7 Power smartphone with a 5000mAh battery. The dual rear cameras can be used to snap visuals. However, the sensors are not powerful as the mainstream smartphones. That said, even 13MP sensors have the ability to capture bright visuals than the hyped 48MP or 64MP primary camera sensors. The waterdrop-notch display includes the front-facing camera sensor. The 5000mAh battery is capable of delivering up to two days of working shelf life. The company has integrated stock Android paired with a water-resistant design.

The Moto E7 Power boasts a 6.5-inch HD+ Max Vision display with a resolution of 1600×720 pixels and a 20:9 aspect ratio. Under the hood, the E7 Power is powered by an Helio G25 processor, up to 4GB RAM, and 64GB expandable internal storage variants. The smartphone is available in 2GB and 4GB RAM variants with 32GB and 64GB storage capacities respectively. You will be able to extend the storage up to 1TB via microSD card slot.

On the optics, the Moto E7 Power carries dual rear camera comprising of a 13MP (f/2.0) primary camera sensor and a 2MP (f/2.4) secondary sensor respectively. The device includes a 5MP selfie camera with f/2.2 aperture, which is low for a latest handset. The camera provides support for Portrait mode, Panorama, Macro vision, Face beauty, HDR and manual mode. The addition of Google Lens provides great value for the smartphone.

In addition to 4G VoLTE, the Moto E7 Power provides support for Wi-Fi, Bluetooth, GPS, A-GPS, FM Radio, and a headphone port. The inclusion of USB Type-C port enables the device to charge quickly. The handset also ships with a dedicated fingerprint sensor alongside ambient light, accelerometer, and proximity sensor. The phone borrows power via a 5000mAh battery with support for 10W fast charging technology.

The 2GB RAM with 32GB storage is priced at Rs 7499, while the 4GB RAM model with 64GB storage is up for grabs at Rs 8299. You can purchase the smartphone starting 12PM on February 26 via Flipkart. The company also announced that the device will be available via offline stores as well.

Redmi Note 10 Series Launch In India: Everything You Need To Know