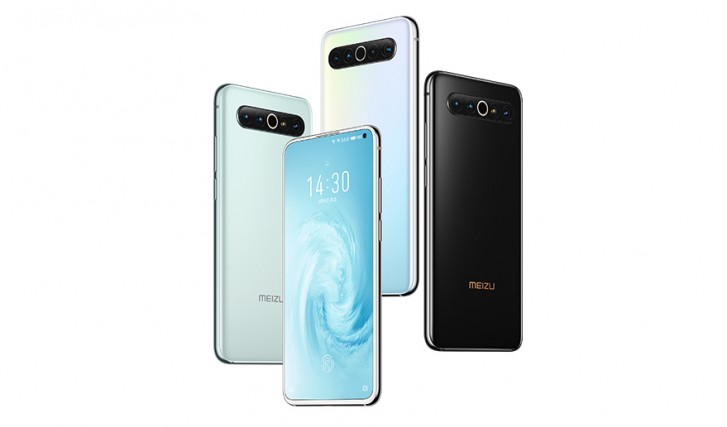 Meizu has announced the launch of Meizu 17 and 17 Pro in China. The main highlight of the Meizu 17 series is the integration of the Snapdragon 865 processor coupled with dual-mode 5G connectivity. The One Mind AI 4.0 is well supported by mEngine 3.0 game booster technology. The Pro variant provides support for a 3MP Samsung S5K33D 3D depth-sensing camera in addition to 27W wireless charging support. The Meizu 17 series ships with a mall 2.9mm diameter punch-hole cutout at the top-right corner. The rear cameras are aligned horizontally instead of the traditional vertical shape. Moreover, the devices are manufactured using CoF packaging technology, which reduces the lower bezel and increases the screen-to-body ratio. The audio quality has been enhanced by 30 percent when compared with the previous counterpart.

The Meizu 17 and 17 Pro features a 6.6-inch FHD+ Samsung AMOLED display coupled with 92.2 percent screen to body ratio. With 90Hz refresh rate, the Meizu 17 series offers 100 percent DCI-P3 colour gamut alongside 180Hz touch sampling rate. The brightness of the display is at its peak with 1100-nits. Under the hood, the devices are powered by Snapdragon 865 processor coupled with Adreno 650 graphics chipset. The addition of 5G not only enable future proof capabilities but also excellent connectivity. The smartphone is pre-loaded with Flyme OS UI based on Android 10. The usability and fluency of the phone will be improved via One Mind AI 4.0 platform.

Talking about the optics, the Meizu 17 boasts a 64MP Sony IMX686 primary sensor coupled with a 12MP depth sensor, a 5MP macro, and an 8MP ultra-wide sensors respectively. The Meizu 17 Pro also offers the same 64MP Sony IMX686 primary sensor but it will have a 32MP Sony IMX616 ultra-wide-angle lens and an 8MP telephoto lens. The company has integrated a 3MP Samsung S5K33D 3D depth-sensing camera as well. The front-facing camera offers a 20MP sensor using which you can capture selfies and perform video chats. The inclusion of Super Night Mode 3.0 enables you to capture crisp low-light shots.
The integration of in-display fingerprint sensor enables you to unlock the device in 0.15 seconds. In addition to 5G, Meizu 17 also provides support for 4G LTE, Wi-Fi 6, Bluetooth, GPS, NFC, and USB Type-C port. The handset series grabs power via a 4500mAh battery with support for 30W Super mCharge fast charging technology. The Pro users can cheer because of the 27W wireless charging capability.

While the Meizu 17 with 8GB RAM and 128GB storage is priced at RMB 3699, the 256GB storage variant will hit the retail shelves for RMB 3999. The Meizu 17 Pro with 128GB storage costs RMB 4299, while the premium 12GB RAM and 256GB storage model is priced at RMB 4699. You will be able to buy the devices in China starting May 11. Meizu also released Collectors Edition for RMB 9999 and will be available for sale starting May 25. The company also released a Meizu 17 Aircraft Carrier Limited Edition with customized themes, charger, case, badge, and a SIM card ejector pin at RMB 4299. This device will hit the retail shelves from May 27.

Realme Narzo 10 Series Launch in India on May 11

Realme Narzo 10 with Helio G80 Processor to launch today: How to watch the live event