Honor 9A with 5000mAh Battery Launched: Features, Specifications, and Price 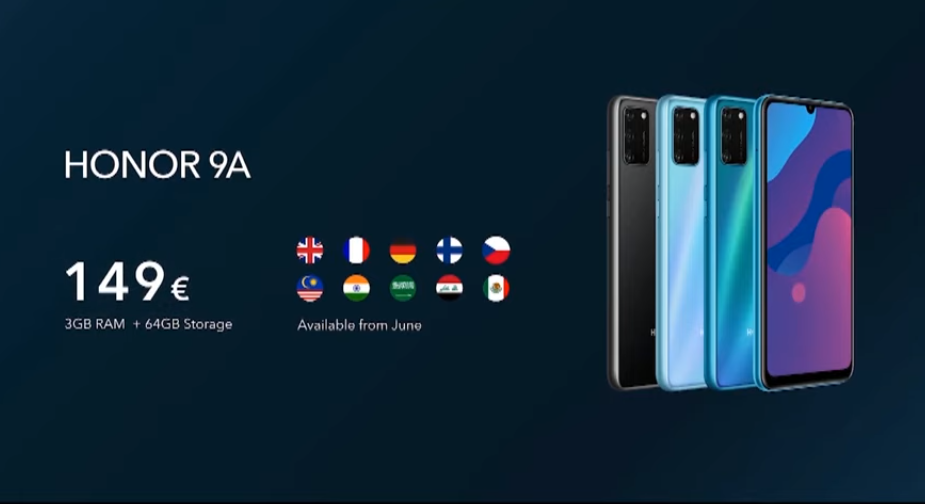 Honor has launched the next-generation Honor 9A smartphone in Europe. The main highlight of the Honor 9A is the integration of a 5000mAh battery coupled with triple rear cameras. Moreover, the handset is pre-loaded with Android 10 operating platform.

On the specifications front, the Honor 9A is equipped with a 6.3-inch waterdrop notch display, MediaTek Helio P22 processor, 3GB RAM, and 64GB internal storage. The handset is loaded with Magic UI 3.1 based on Android 10 operating platform. You will be able to extend the storage up to 512GB via a microSD card slot. You will work with Huawei App Gallery instead of Google Play Store.

The smartphone borrows power via a powerful 5000mAh battery. According to the company sources, the Honor 9A is capable of delivering up to 33 hours of talk time and 35 hours of video playback. The handset also delivers up to 37 hours of FM Radio playback.

Talking about the optics, the rear side includes a triple-camera comprising of a 13MP sensor, a 5MP ultra-wide sensor coupled with a 2MP depth sensor respectively. The front-facing camera offers an 8MP pop-up sensor using which you can capture stunning selfies. In addition to all standard sensors, the phone also comes with a dedicated fingerprint sensor on the rear side.

The Honor 9A is available in Midnight Black and Phantom Purple color variant. The smartphone with 3GB RAM and 64GB storage has been launched in Europe at EUR 149. The device will be available on Hihonor, Amazon, and other offline retailers starting July 1 via pre-order.

Amazfit Stratos 3 launched in India: Everything you need to know

Realme hikes the prices of Narzo 10A and Realme C3 Price